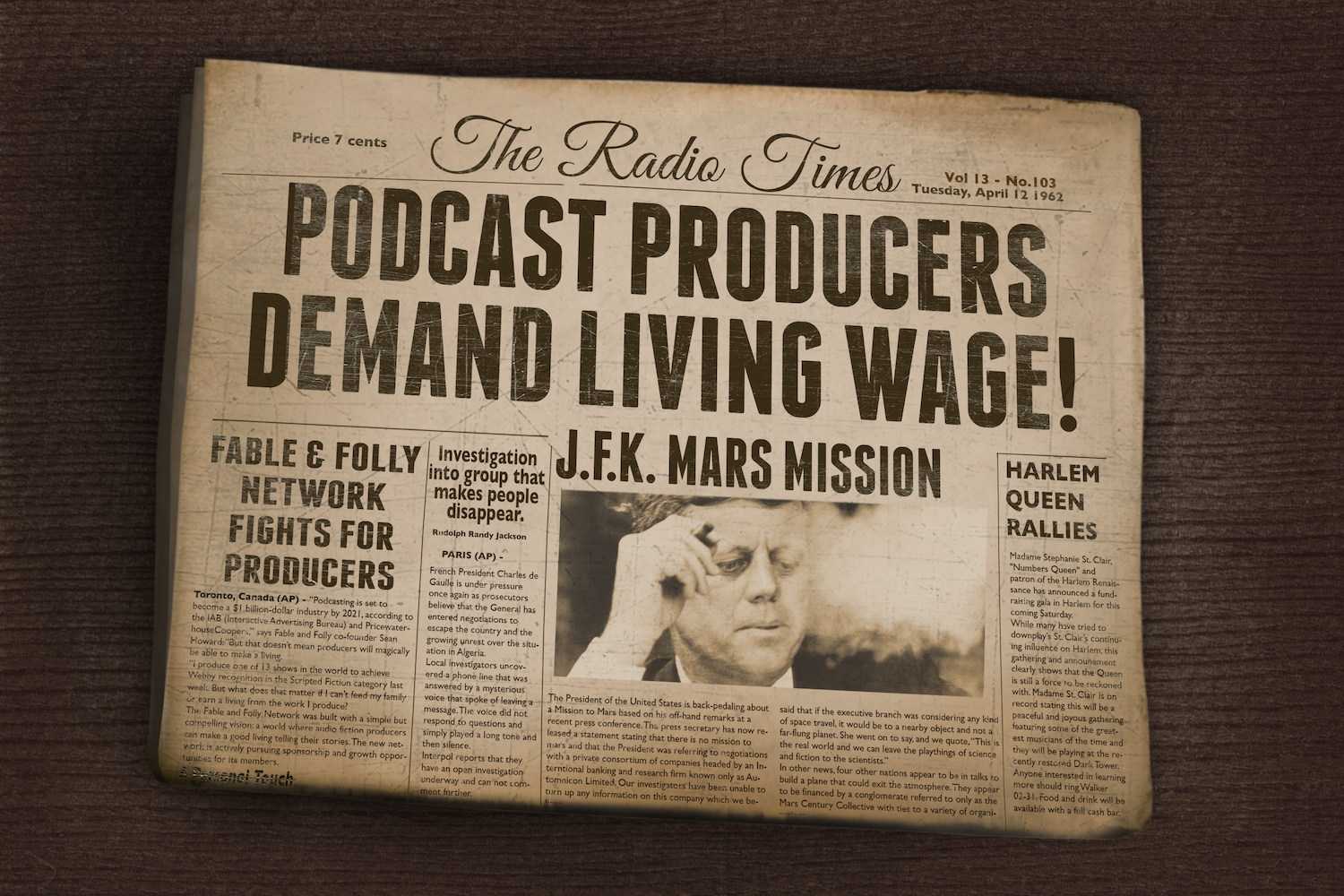 Podcast Network Aims to Sell Out (of inventory, that is) and Get Producers a Living Wage

TORONTO, CANADA, May 7, 2020 – The Fable and Folly Network was built with a simple but compelling vision: a world where audio fiction producers can make a good living telling their stories. The new network is actively pursuing sponsorship and growth opportunities for its members.

“Podcasting is set to become a $1 billion-dollar industry by 2021, according to the IAB (Interactive Advertising Bureau) and PricewaterhouseCoopers,” says Fable and Folly co-founder Sean Howard. “But that doesn’t mean producers will magically be able to make a living.

“I produce one of 13 shows in the world to achieve Webby recognition in the Scripted Fiction category last week. But what does that matter if I can’t feed my family or earn a living from the work I produce?

“Many of us in the podcasting industry have come to the realization that we must add advertising and sponsorship to our revenue mix,” Sean continues, “but I kept running into the same concern, even from people representing our shows – ‘You can’t sell back catalog’. But here’s the thing: in serialized fiction, there is no back catalog. It’s more than just ‘evergreen’ – listeners start from Episode 1.

“I realized we needed to pull together some of the best minds in this space and consolidate our reach so that we could change how advertising is sold on fiction podcasts.”

The Fable and Folly Network launches with 15 shows and expects to add more in the future. The founding members include: The Amelia Project; Alba Salix, Royal Physician; Marsfall; The Carlötta Beautox Chronicles; Civilized; We Fix Space Junk; Greater Boston; Death by Dying; Harlem Queen; Dumbgeons & Dragons; What’s the Frequency? and Moonbase Theta, Out. Of those, Civilized, Marsfall and Moonbase are honorees in the 24th Annual Webby Awards.

“We’ve lost our way a bit,” says Sean. “In the early days of radio, advertising developed into an art. Ads could be part of the show you were listening to. Likewise, podcast sponsorship can be more than announcers repeating the same bullet points over and over again. It can be something powerful and creative that resonates with an audience to create unheard-of levels of engagement and conversion.

“We are seeking partners who want to create sponsorship stories that audiences actually want to listen to. If you are looking to launch or grow a product, service or a media property such as a book, podcast or movie, I want to talk with you and show you what we can do.”

You can learn more about the Fable and Folly Network and its award-winning roster of shows by visiting fableandfolly.com/network.

Sean is the co-founder and head of ad sales at Fable and Folly. He also appears in The Axe and Crown, The End of Time and Other Bothers and Civilized.