Welcome back to Pro-deux-er(s) of the Months! We’re highlighting the creator of Red Valley, Alan Mandel. Red Valley is a mystery drama about the limits of experimental science, confronting your own past, present & future, & trying to remember the level select cheat from Sonic 2.

When did you join Fable and Folly?

We are a very recent addition to the Fable & Folly family, as Red Valley joined the network in September of this year! We are absolutely delighted to join a network of wonderful creators and shows. 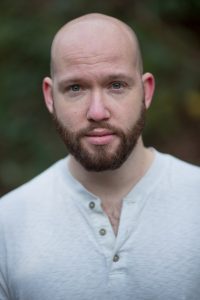 What part of making your show gets you the most excited?

One of the things that brings me the most joy whilst making Red Valley is hearing the first sound design edit. There’s something really special about being able to hear all of the different parts of the process come together for the first time. When working on each part of production, you can sometimes lose the bigger picture as you become hyper-focused on specific things like, finalising the scripts, directing the performances or assisting with all of the elements of post-production. But that moment when you finally get to hear the fruits of everyone’s labour it makes all of the hours of hard work worth it.

What is your favorite thing about audio fiction as a medium?

There’s something truly special about sound. Sometimes, it feels a bit like a magic that can’t be explained because it relies on our individual imaginations. It’s not a passive medium so it requires a specific type of engagement for it to work, which is unlike anything that can be experienced through Film, TV and Theatre. Audio drama gives audiences the opportunity to take a break from being surrounded by screens and allows the mind to wander to places it may never have thought possible.

What’s a big, pipe-dream goal you have for your show?

To hit a million downloads would be an insanely wonderful achievement for us. To have our show reach that many people would break all the expectations that we originally had when making it, but we’ve still got a way to go yet!

What do you hope listeners take away from your show?

Red Valley has ended up mixing a lot of genres together – mystery, sci-fi, comedy. While we’ve thrown a lot into the pot, we try really hard to keep the story in some kind of relatable reality. So I hope someone who listens to the show finds a character, a situation or an idea that they can truly relate to, that reflects a truth for them. And we had a listener once say they were going to use one of our character’s insults in real life.

In your opinion, what’s the most important part of a good in-universe ad?

A good in-universe ad has to do its job without compromising the integrity of the show. And if at all possible it really should be funny!